The month of June is considered the stag beetle month. However, there is still an active period before and after that is quite important for the success of this last and crucial phase in the long life of the stag beetles.

The males hatch up to a week earlier than the females. Males can be expected to appear regularly from May 15 onwards. The last females hatch in early June. These times are subject to the influence of current weather. Thunderstorm mood animates hatching and flight.

Both sexes are predominantly crepuscular, especially with regard to their flight behavior. The take-off is intensively prepared. Females fly less frequently and also cover larger distances continuously. Males, on the other hand, run only in close ranges and usually choose flight even for distances of a few meters. Model calculations based on my intensive telemetric studies suggest as maximum distances of single individuals from leaving the nest for females 1,000 meters (dispersal) and for males 3,000 meters (gene flow). The beetles initially hide during the day and are predominantly active only during evening swarming periods and at night. Encounters with humans are incidental. This pattern changes with increasing lifespan, where daytime activity may also occur.

The ability of adult stag beetles to feed is limited to ingesting tree sap and the juices of ripe fruits such as cherries. Both sexes lose condition from the time of hatching. Sap intake can only mitigate condition loss. Rather, condition loss correlates with the level of average daily temperatures. The duration of the already short active imaginal life of stag beetles is negatively affected by excessive heat as in 2003. A fact which could have implications for the species in the context of climate change. Sap intake, on the other hand, plays a role in attracting males by the female. The female is able to create small sap marks by herself. The large encounters described in the literature at bark wounds of old oaks usually take place at small sap marks of individual females. Here it comes to the meeting of rival males and the often described rival fights.

In addition, there are alternatives in mating behavior. Thus, mating can already occur in the nest area of one or both partners and females can purposefully approach males in close ranges of a few meters and directly animate them to mate. Strategies are also influenced by beetle size, just as the size ratio of males to females determines mating success. After successful mating, the males continue searching, flying to other nests, while the females begin searching for nests, sometimes running during the day. This running of the female in the vicinity of the nest resembles an inspection for fitness. Burrowed females remain in the habitat for several weeks, dying there or being found dying or dead in the vicinity of the breeding site. Females may be encountered continuously into July, while the first males die as early as late June. In July, males are rarely encountered.

Stag beetles have many predators (woodpecker, magpie, cats, martens, hedgehogs) especially during the stag beetle season. Road traffic, lights, slippery surfaces, small bodies of water, and heat stress also claim many victims. Males are mostly affected, and not infrequently pay the price of their “antlers” with premature death. Females, on the other hand, are less conspicuous and sometimes even tolerate treading on soft surfaces, thanks to their flat body shape. 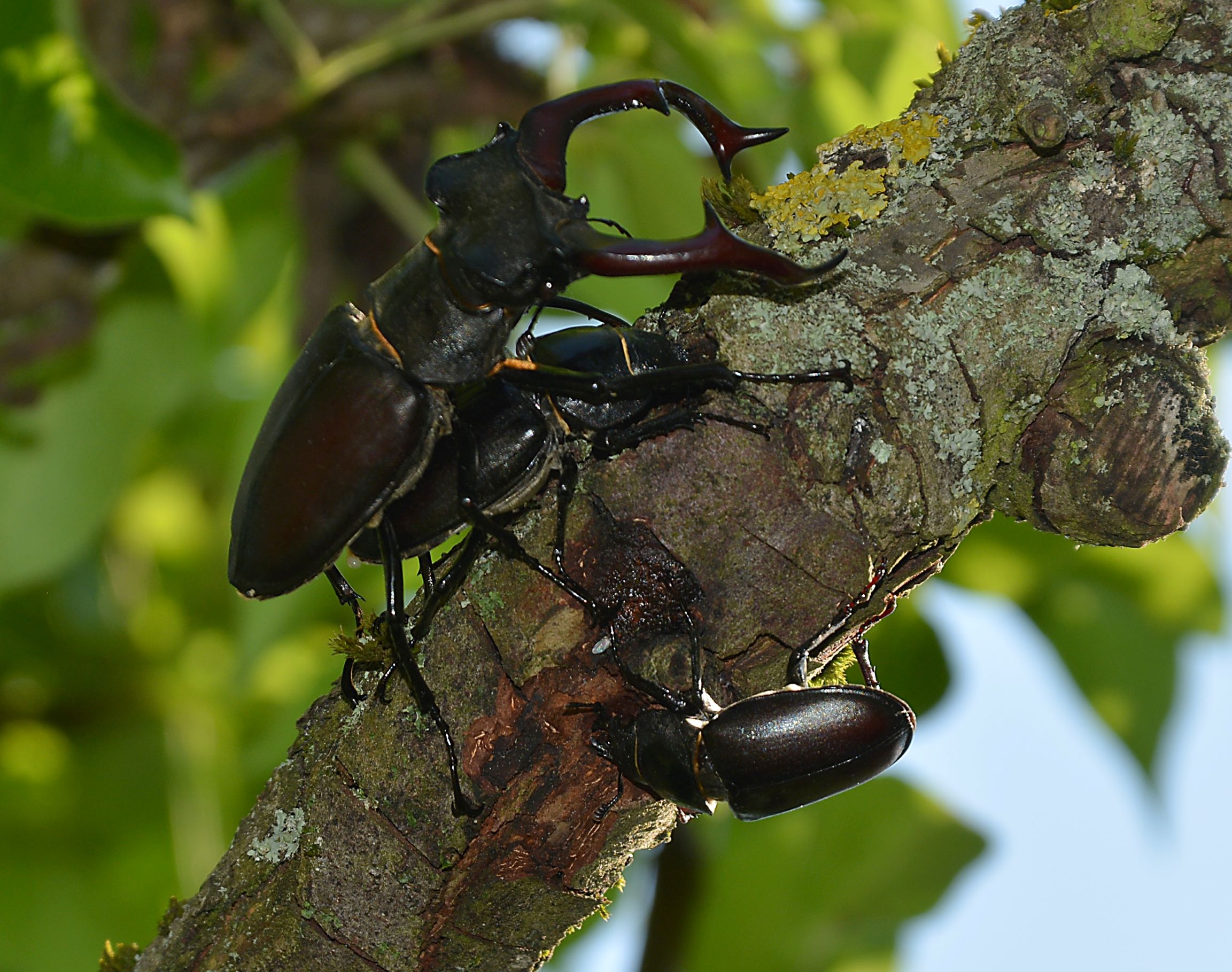 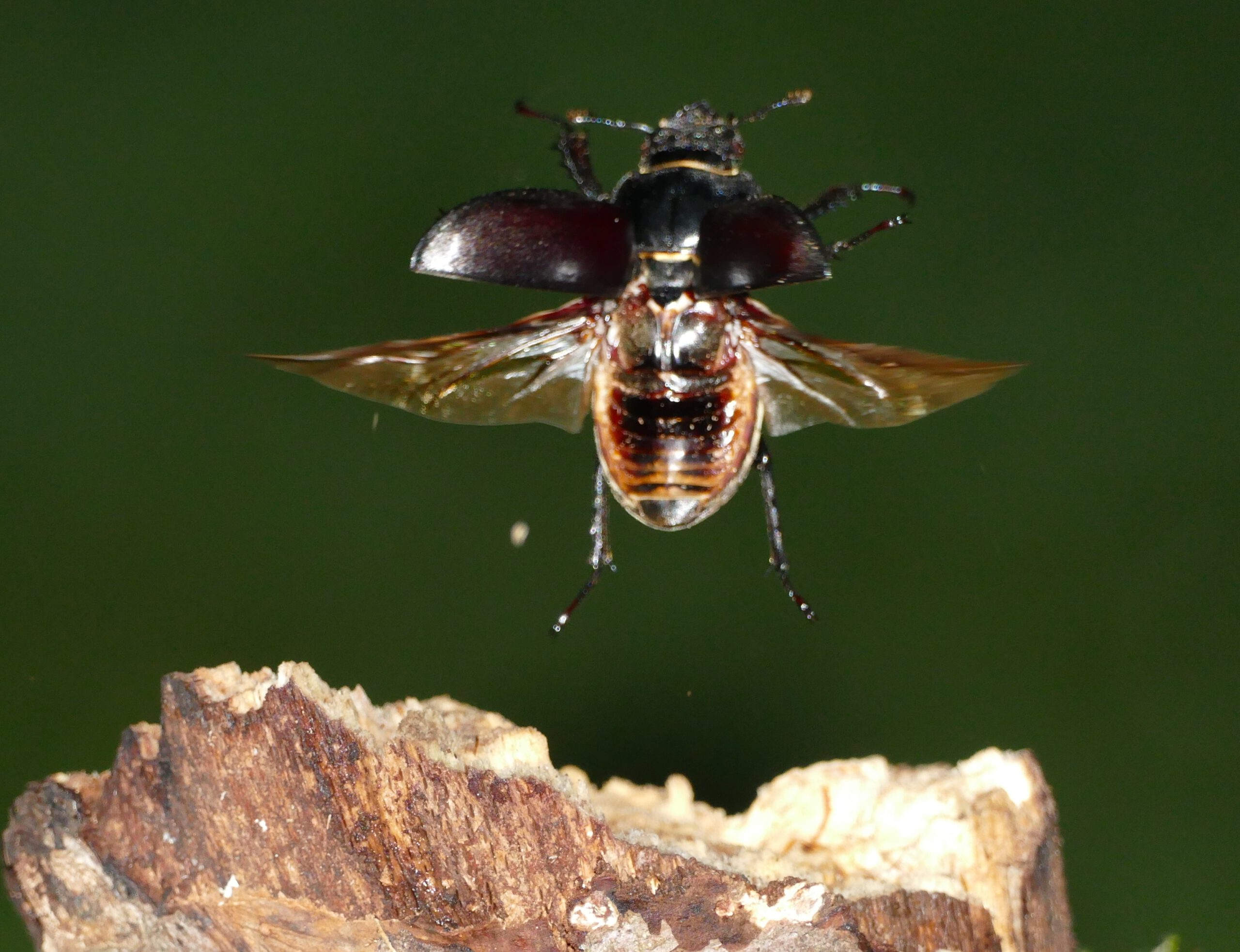 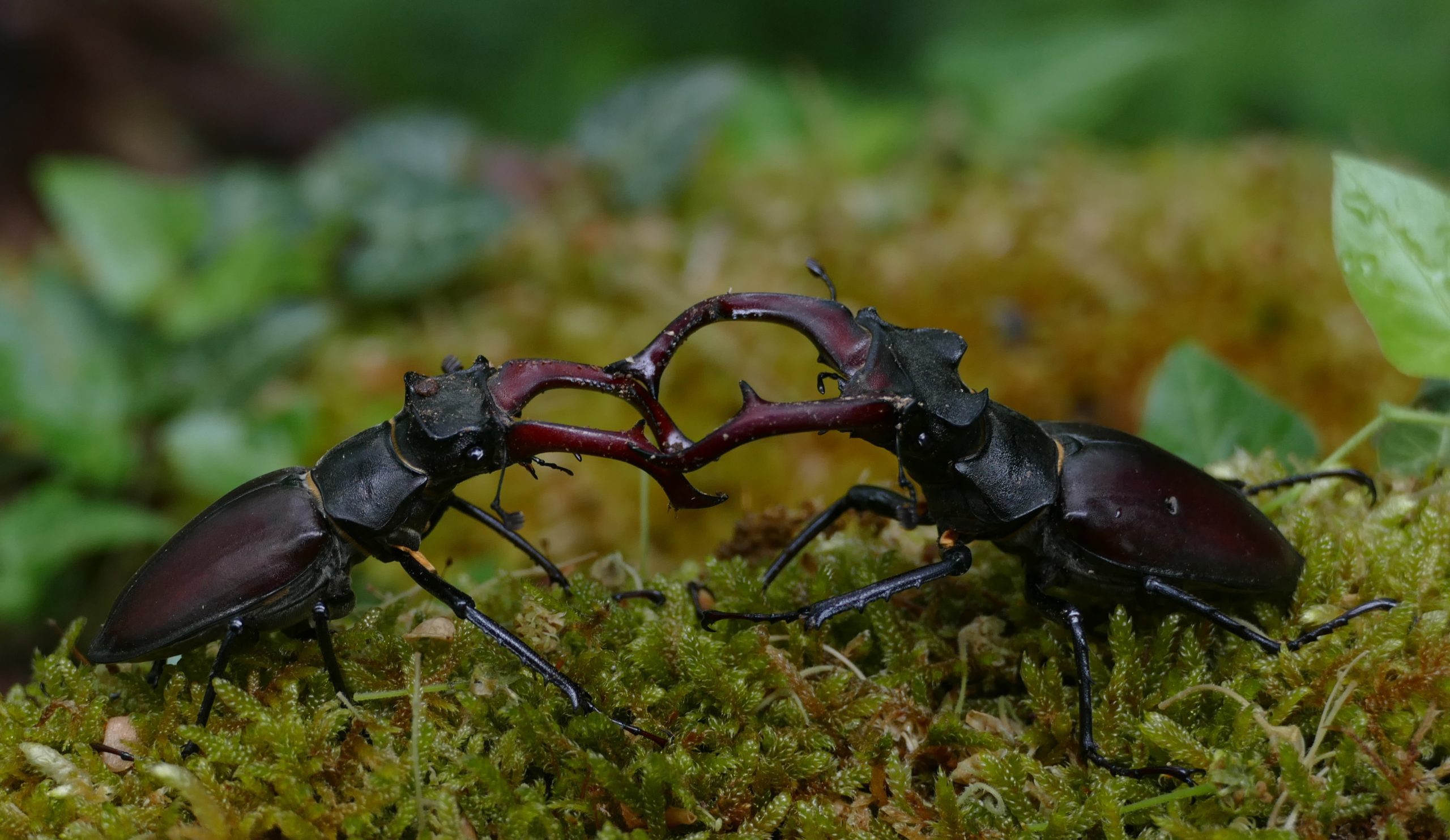 Female after being eaten by birds. The front part usually remains intact and can move for hours, even days!

Not often, but sometimes they drink one over the thirst!
For refueling they like to take fruit or tree juices.