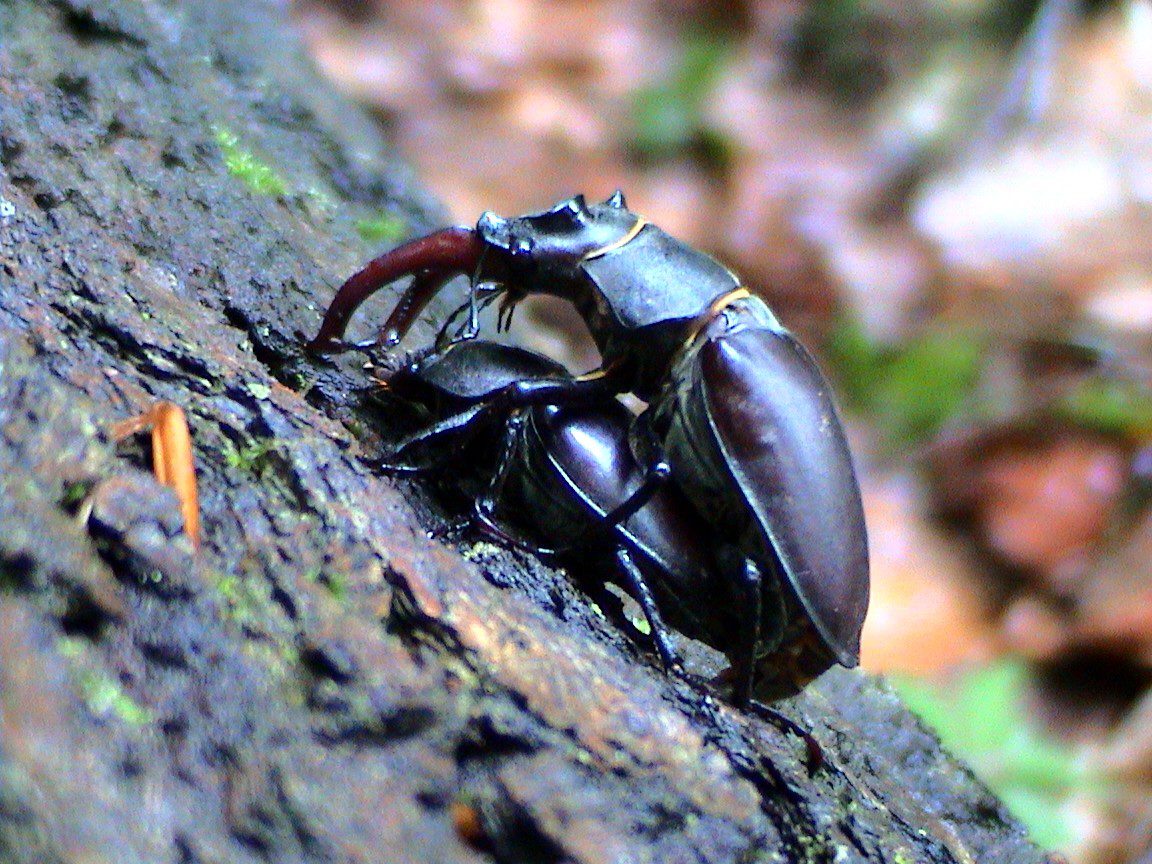 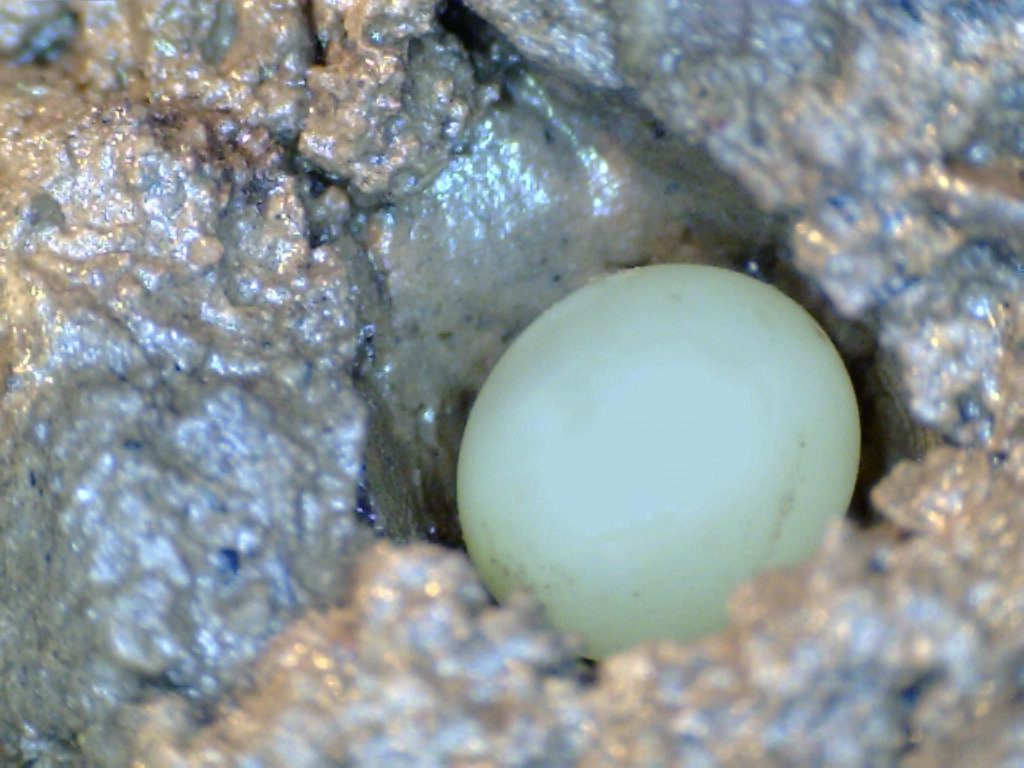 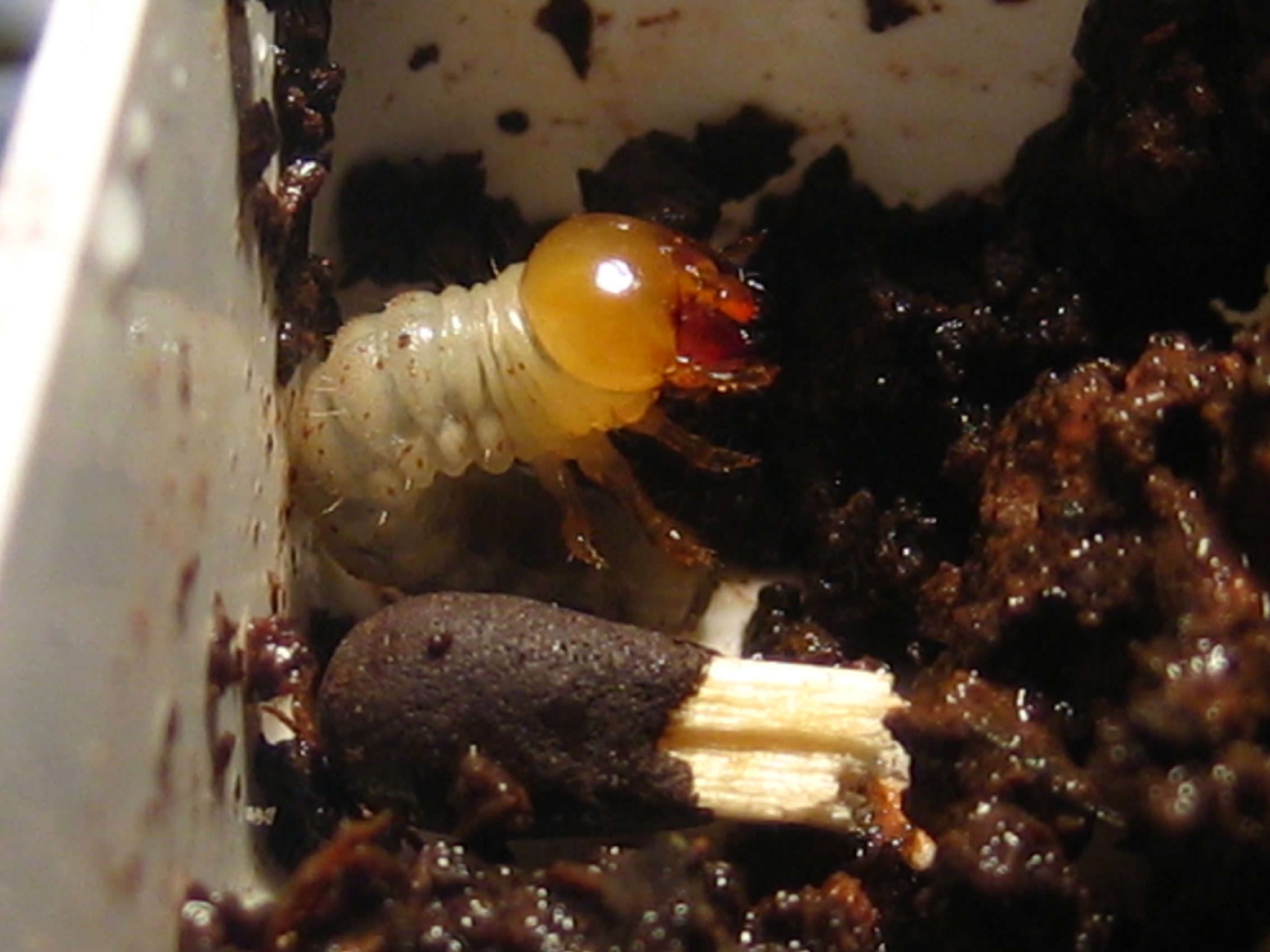 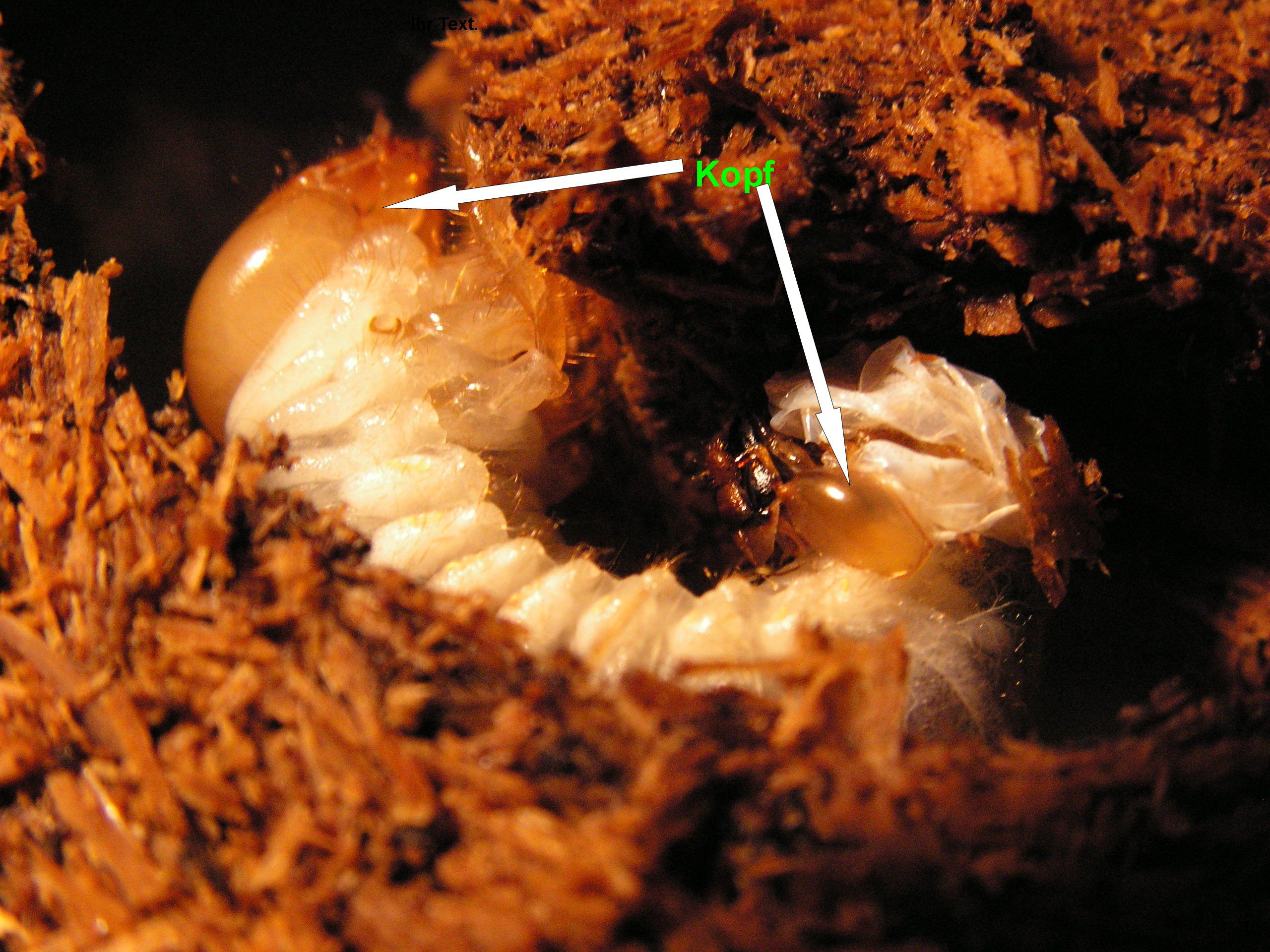 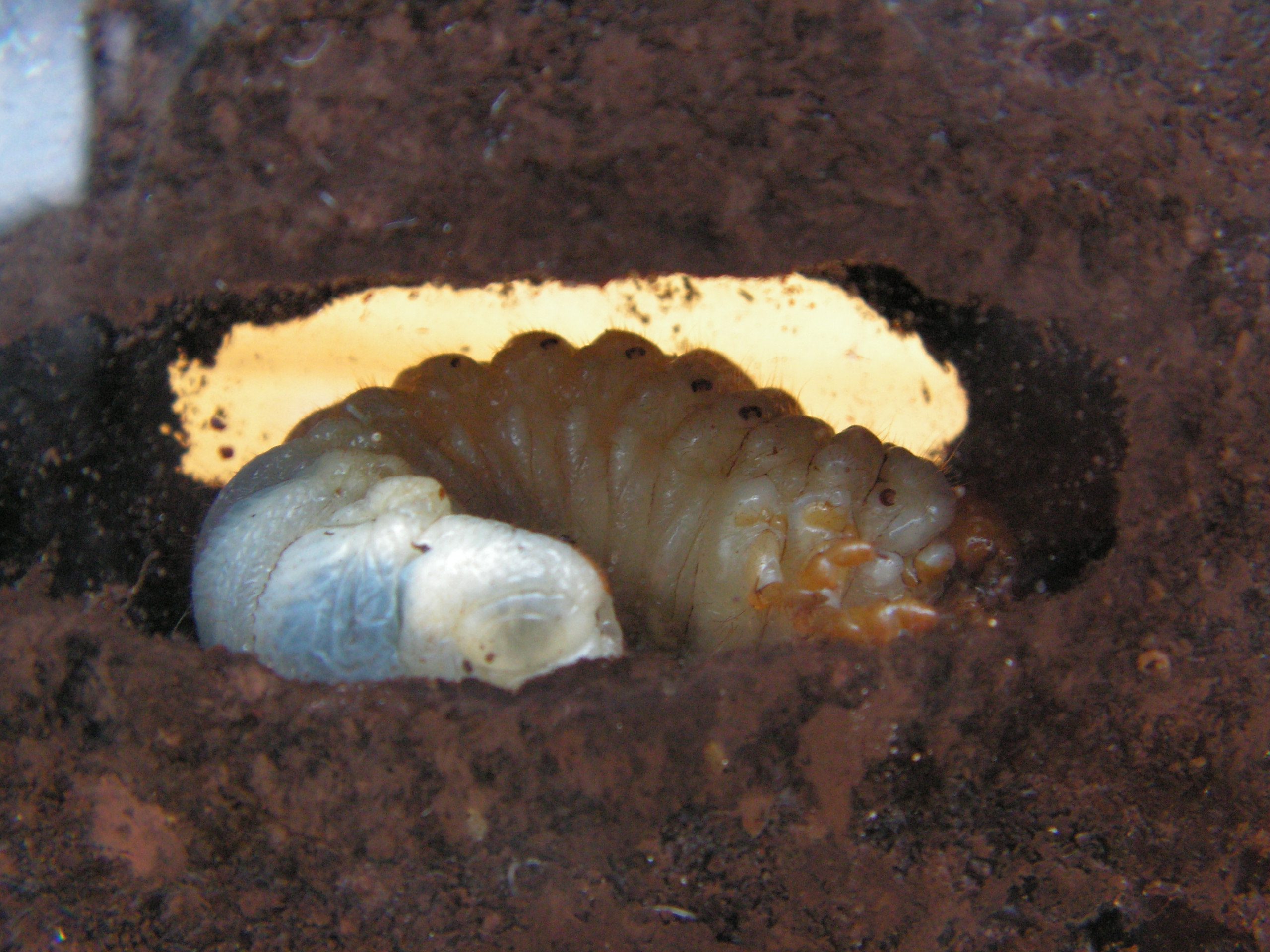 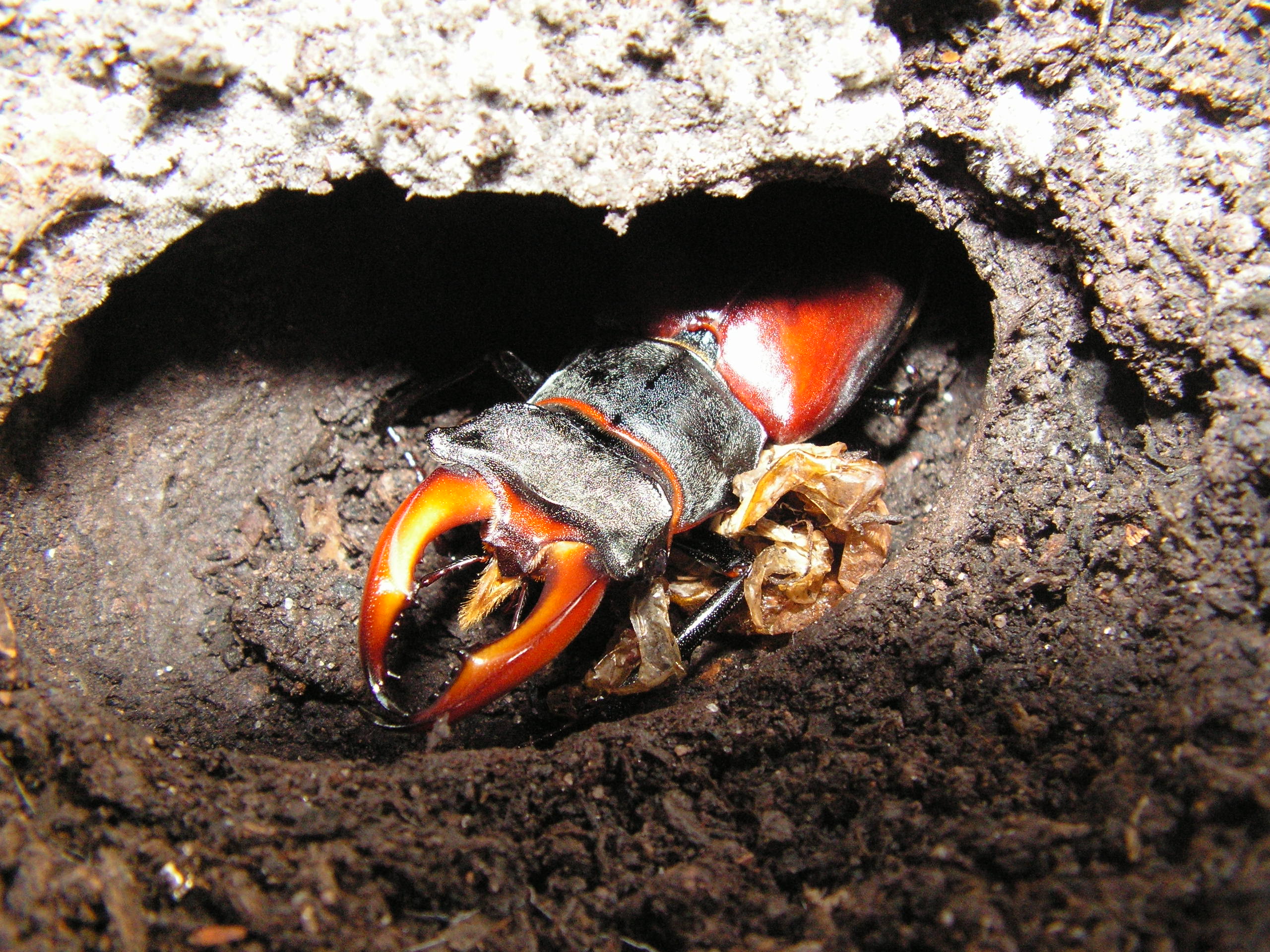 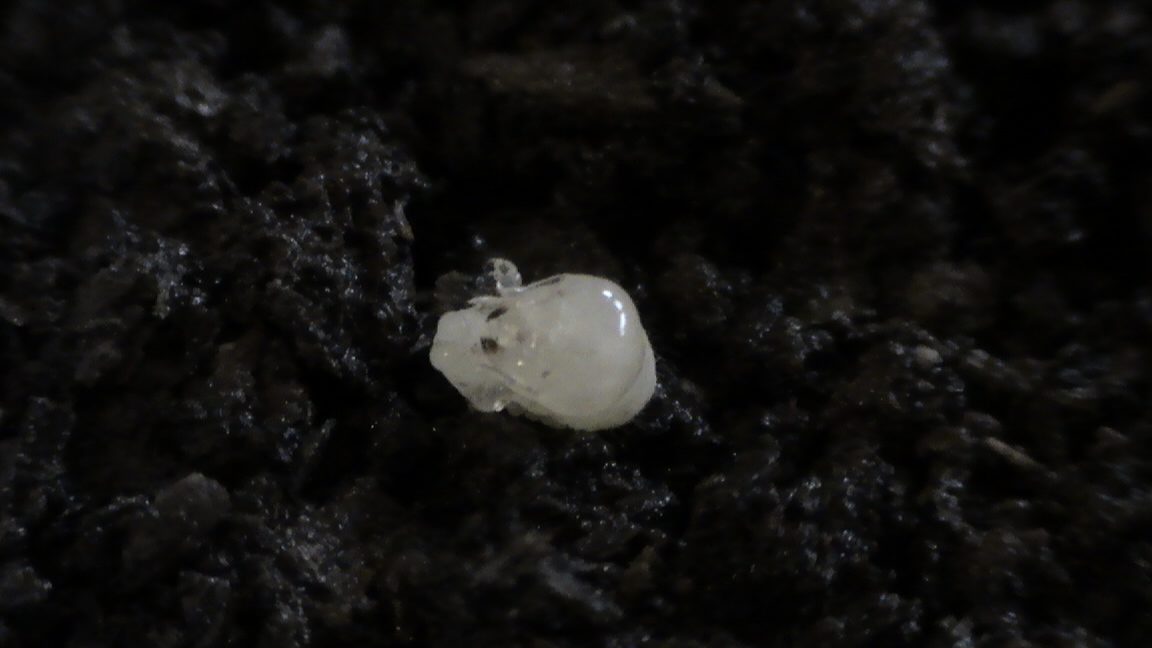 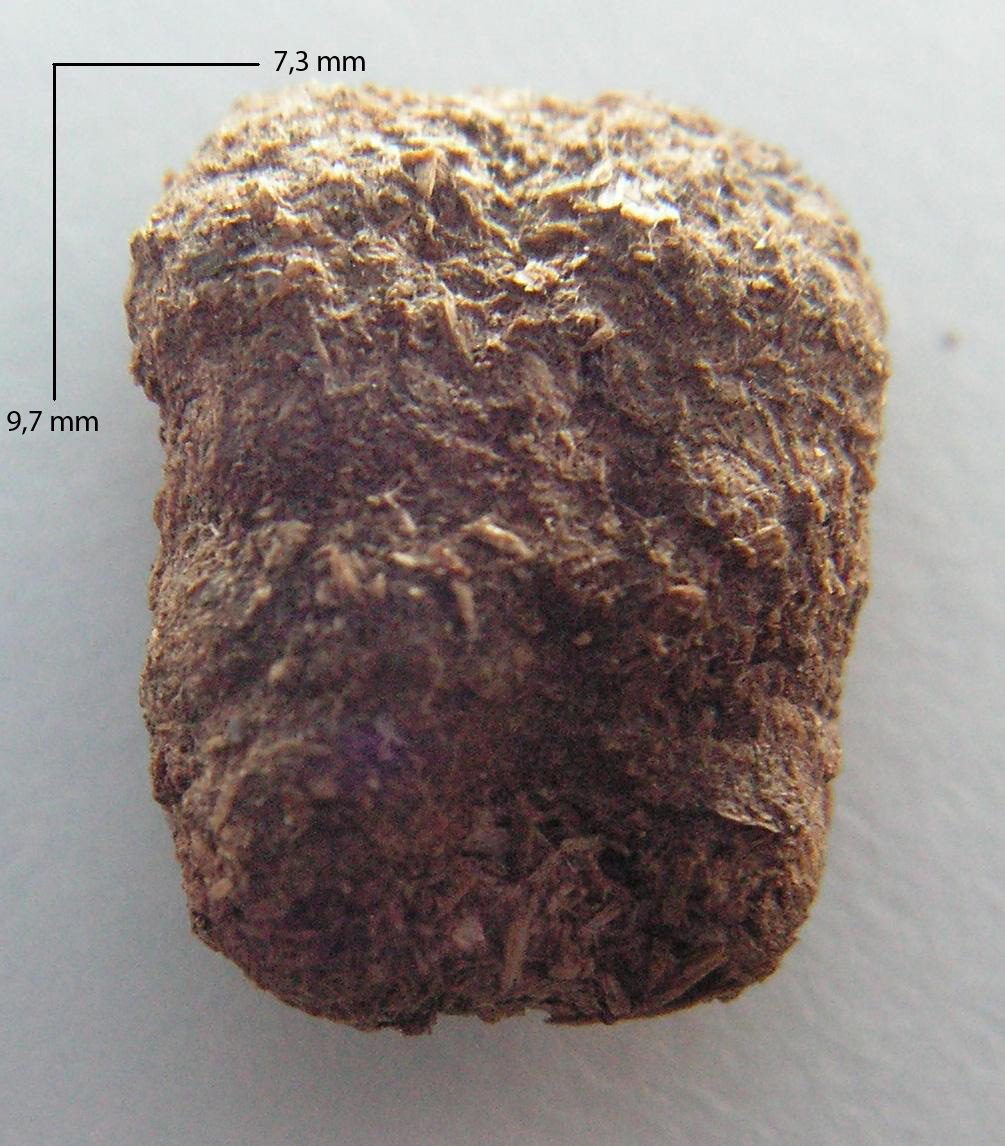 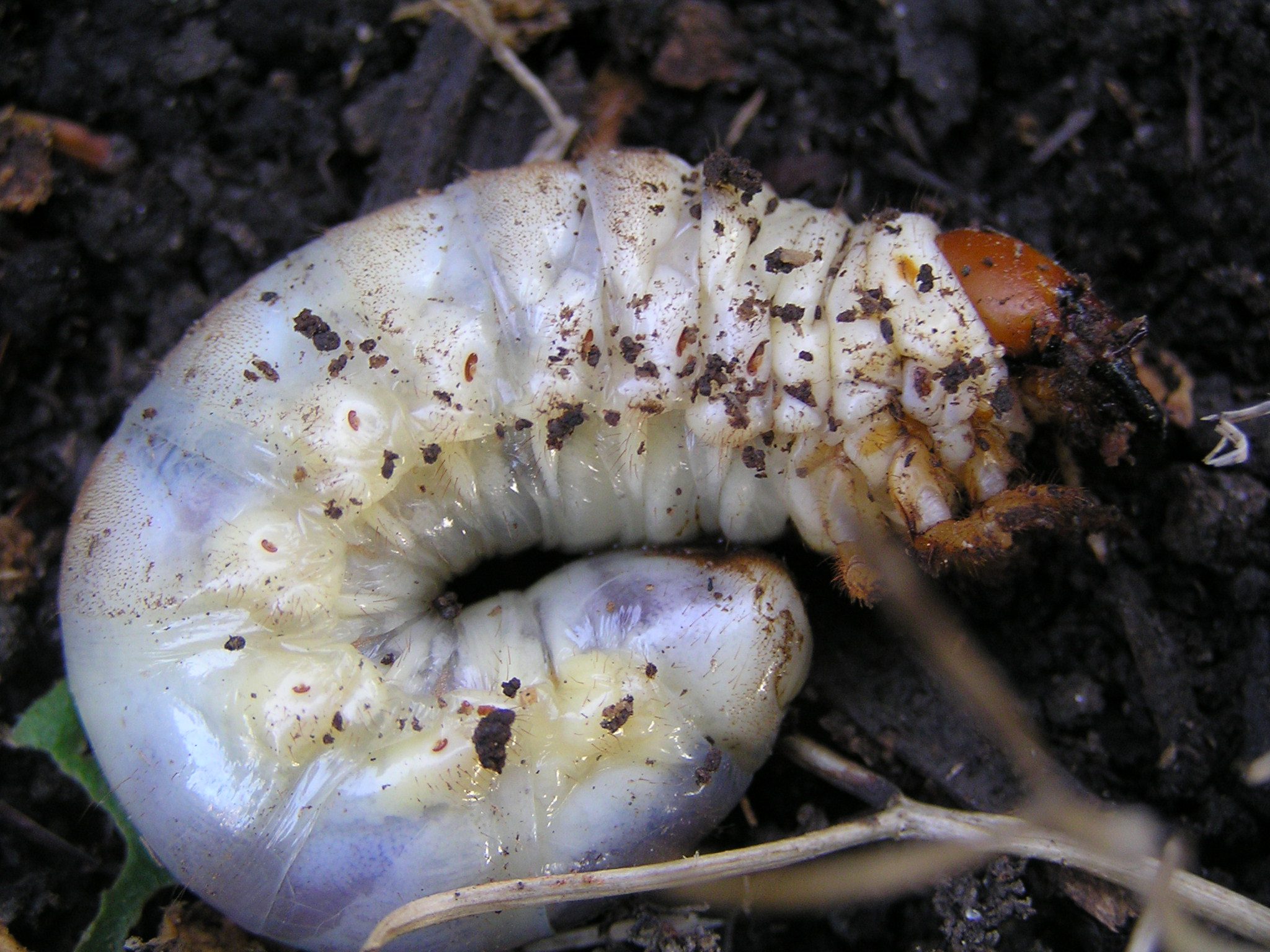 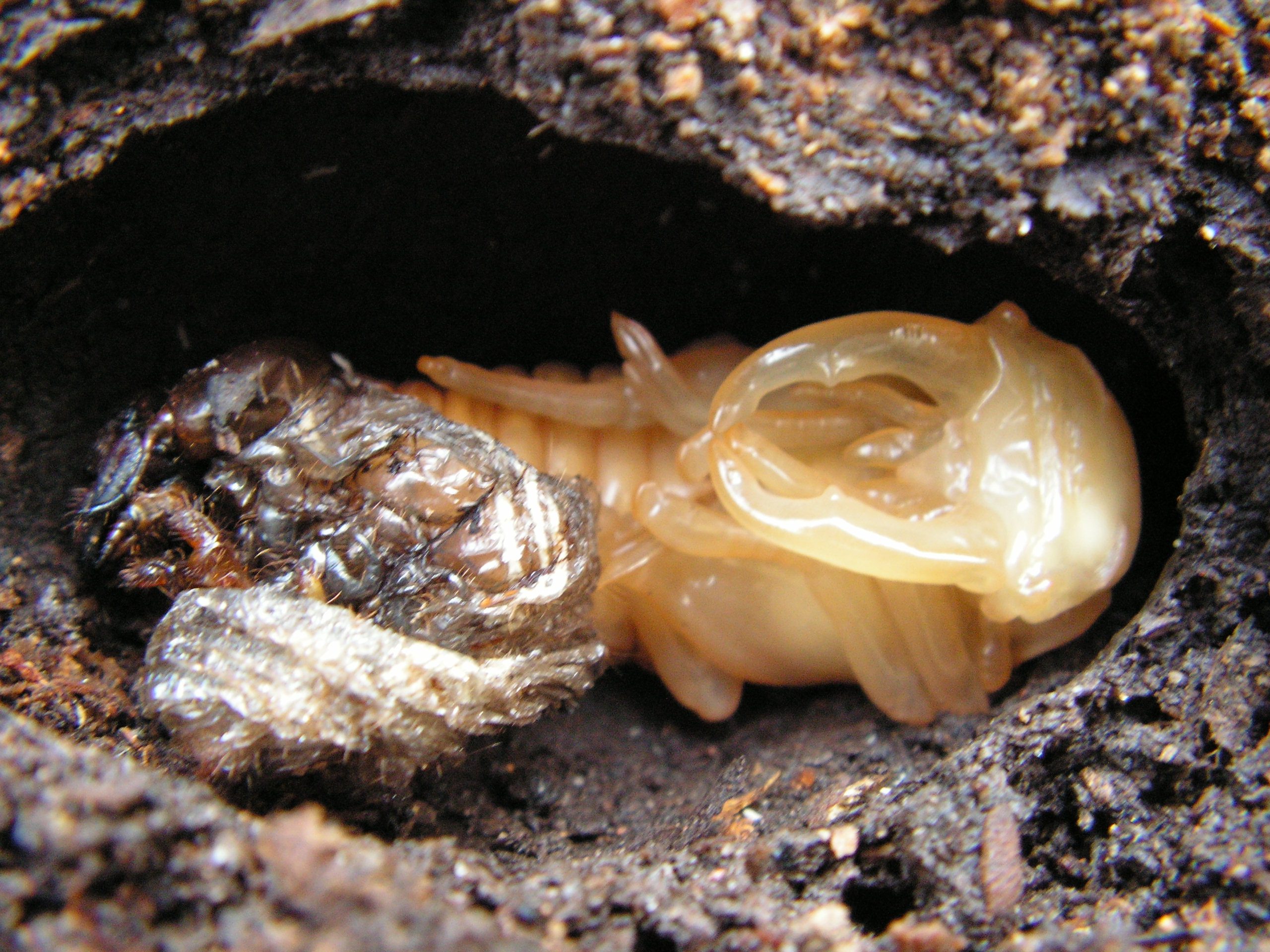 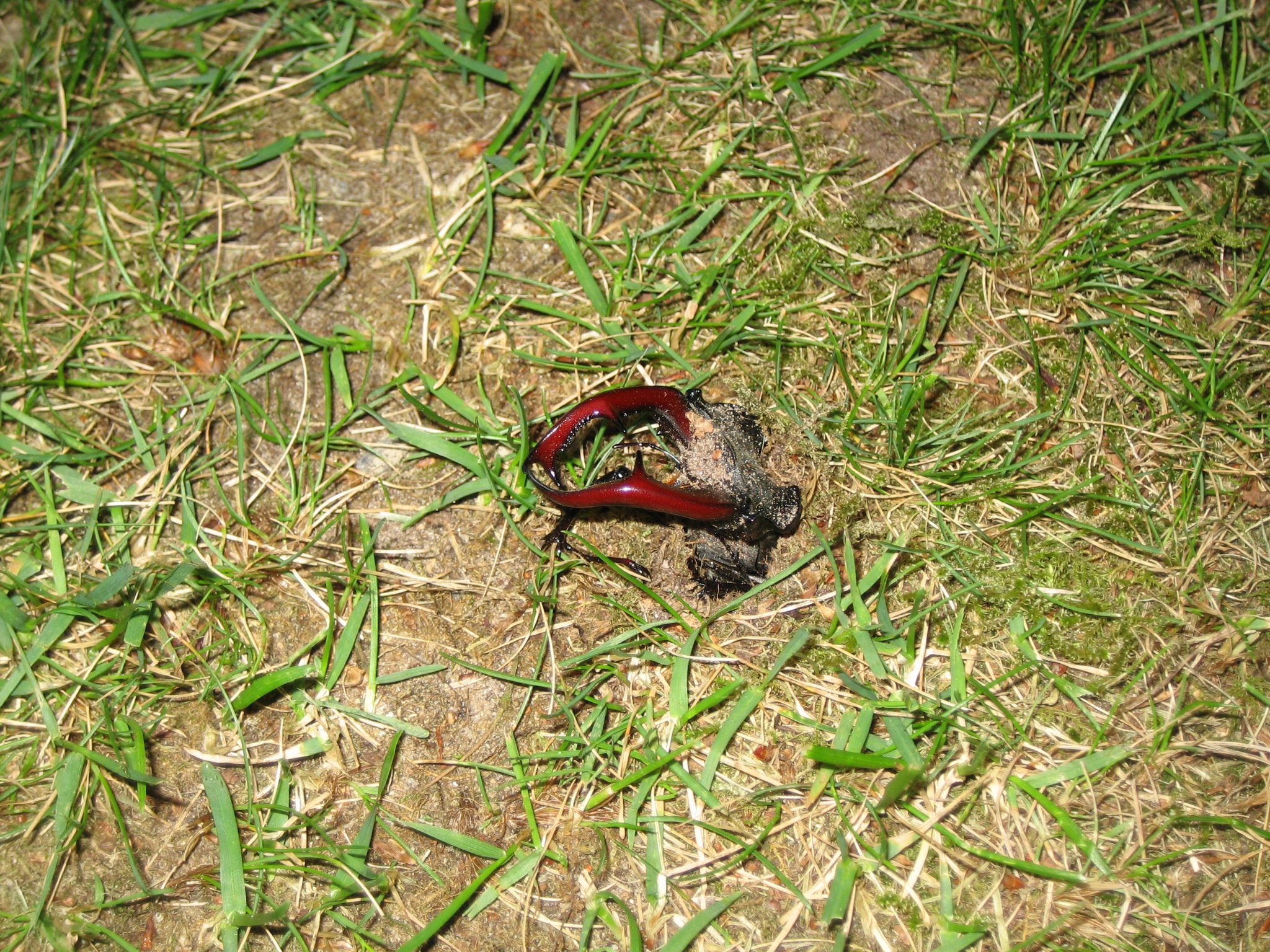 After mating, the females search for a suitable rootstock; the egg is laid protected up to 50 cm deep at the transition zone between soil and decaying rootstock/stock. The egg itself lies in the soil close to the decaying wood. The eggs usually begin to swell within 14 days and hatching usually occurs after three to six weeks.

Right after hatching, the larva is glassy, almost translucent. Over the next few days, it feeds in the earthy area before moving into the decaying wood. This is probably the most vulnerable stage in the life of the stag beetle. Mechanical pressure on young larvae is immediately fatal!

After a few days the larva, which is now over the size of a match head, is already colored and the intestinal tract is filled.

The larva eats its way through the decaying (white rotten) wood. It creates tunnels and produces parcel-shaped excrement balls, which are reused. The rotted wood is systematically processed into humus by symbiosis with microorganisms and repeated consumption. The substrate is eaten through several times during this stage of development.

It grows and sheds its skin at least 2 times and can weigh up to 16 g. Three larval stages can be distinguished. In May/June of the previous year, the larva decides to metamorphose into a beetle. It has the opportunity to do so annually in May/June from the third year of life. In individual cases, this can take until the 7th year of life. The reasons for this are oligofactorial (food supply, genetics, disturbances, group dynamics). Later differences in beetle sizes can be quite considerable accordingly. To initiate metamorphosis, the larva leaves the decaying wood and builds a cocoon of soil (pupal cradle) in the soil, ingesting and processing soil itself. It builds a stable, insulated earth chamber with a generous interior. After completion, its larval structure changes. As a pre-pupa with a parchment-like shell and already closed body openings, it lies for several days in the shell it has fashioned. It is still capable of limited movement, but the decision to metamorphose has been irrevocably made.

The larva transforms into the pupa, which can also move (turn) in the burrow. The two posterior body processes serve as levers. In the male, the antler-like mandibles are already clearly visible. The pupal period can last up to 60 days. In the later pupal stage the coloration already begins.

From the beginning of September, the finished beetles lie in the pupal cradle, full of energy reserves. There they overwinter protected from frost in depths up to 30 cm. In April/May they leave the burrow and burrow upwards, just below the surface of the earth, where they wait for the suitable evening hatching time. Males begin hatching in mid-May, females usually around the turn of May/June.

Now the actual stag beetle season begins. During this period, which lasts only a few weeks, the beetles lead an often very hectic life in which everything revolves around successful mating and later egg laying. However, this life is also characterized by longer periods of rest and hiding due to weather conditions.

From wood to humus. The larva builds its pellet and moves on first.