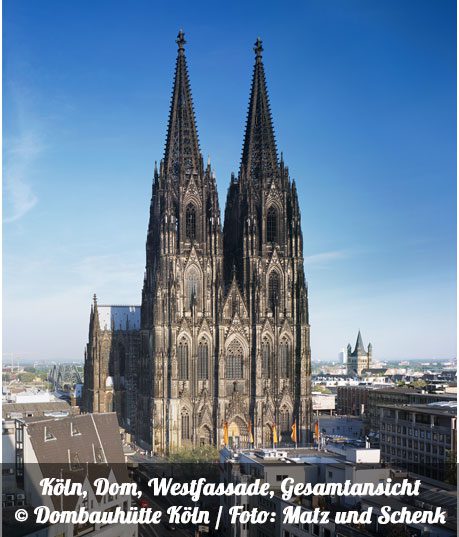 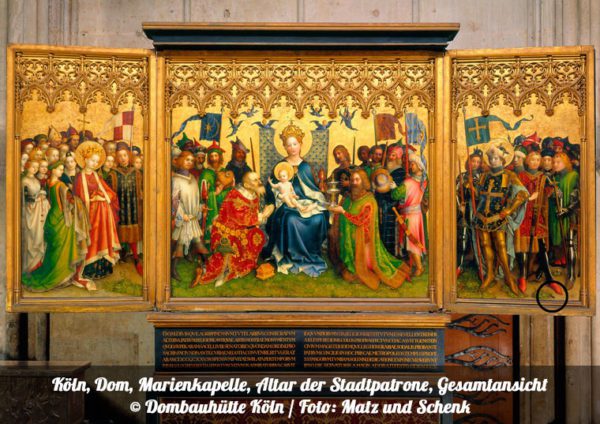 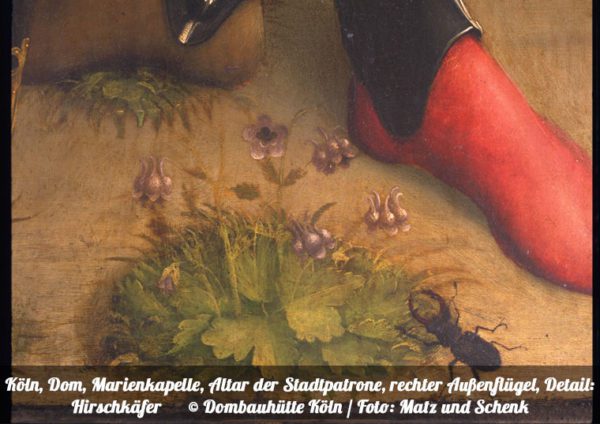 Stag beetles in the cathedral of Cologne

“Stag beetles in the Cologne Cathedral and that already for hundreds of years”, was the introduction of a mail that reached me in February 2014. It was not a message from this time, but the interested forest colleague Hartmut König had read in the “Kölner Domblatt 2013” a report about the painting of the painter Stefan Lochner on the age of the city patrons from 1440. Precisely on this altarpiece, a male stag beetle is depicted on the lower right edge of the picture next to a series of plants also surrounded by myths.

While in Cologne the special significance of the stag beetle in mythology is also considered as a motif, there is also something to suggest that a sponsor of the altarpiece named Hirtz (an old synonym for stag beetle ) was honored with it or wanted to secure a place among the saints. In any case, it’s nice that there were stag beetle lovers even back then.

The significance of stag beetles on religious images stems from the similarity of the stag beetle’s mandibles to the antlers of deer. Stags have been revered as sacred animals since ancient times, and in Christian painting they are considered a symbol of Christ as the victor over evil. At least that is how Eva-Sprecher-Uebersax and Giorgio Taroni see it in their book “Lucanus cervus depictus” (ISBN 88-88601-03-1), an interpretation that stag beetle lovers are happy to endorse. By the way, Stefan Lochner, the painter of the picture, was also elected to the Cologne City Council 7 years later, so the stag beetle brought him luck, too!

Where can the stag beetle be found?

The stag beetle of the “Cologne Cathedral” sits at the common columbine Aquilegia vulgaris, to this plant it also fits quite well!

“The locations of the common columbine are on summer-warm, moderately dry to fresh, nutrient- and base-rich, preferably calcareous, mildly acidic-humic, loose, stony, sandy or pure clay soils; it is a gauze soil plant. The sunnier the site, the fresher the soil should be.” In sparse, warm oak woods and outside the forest, such as in parks and semi-natural gardens, this otherwise quite rare plant can be found. So one knew already in the 14th century about the light and warmth affinity of the stag beetle! Today’s stubborn image of the stag beetle as a preferred inhabitant of primeval forests must therefore have been significantly influenced by our recent history and the oak myth surrounding this beetle, which has been cultivated to the present day and which we will discuss in more detail in the next article. 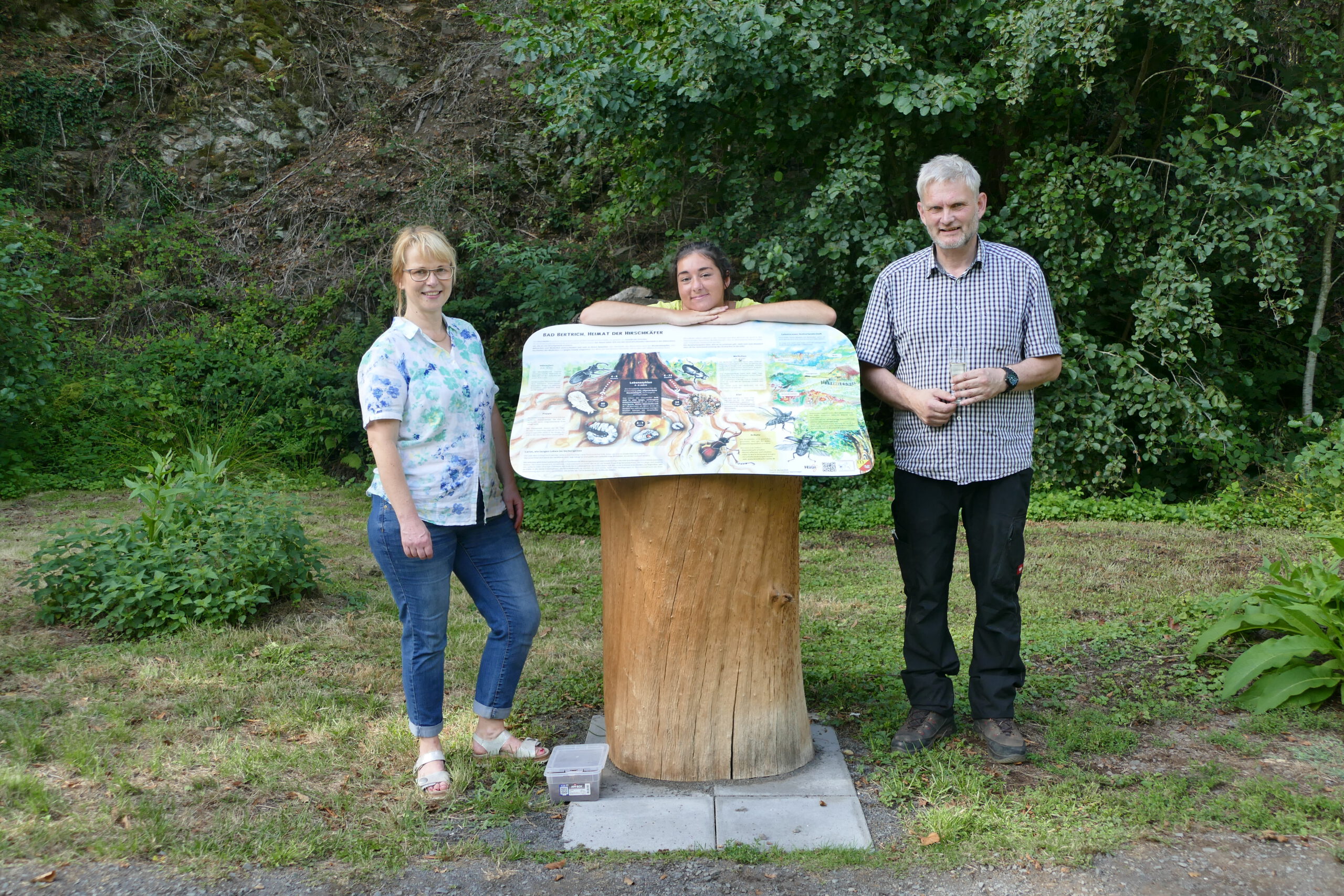 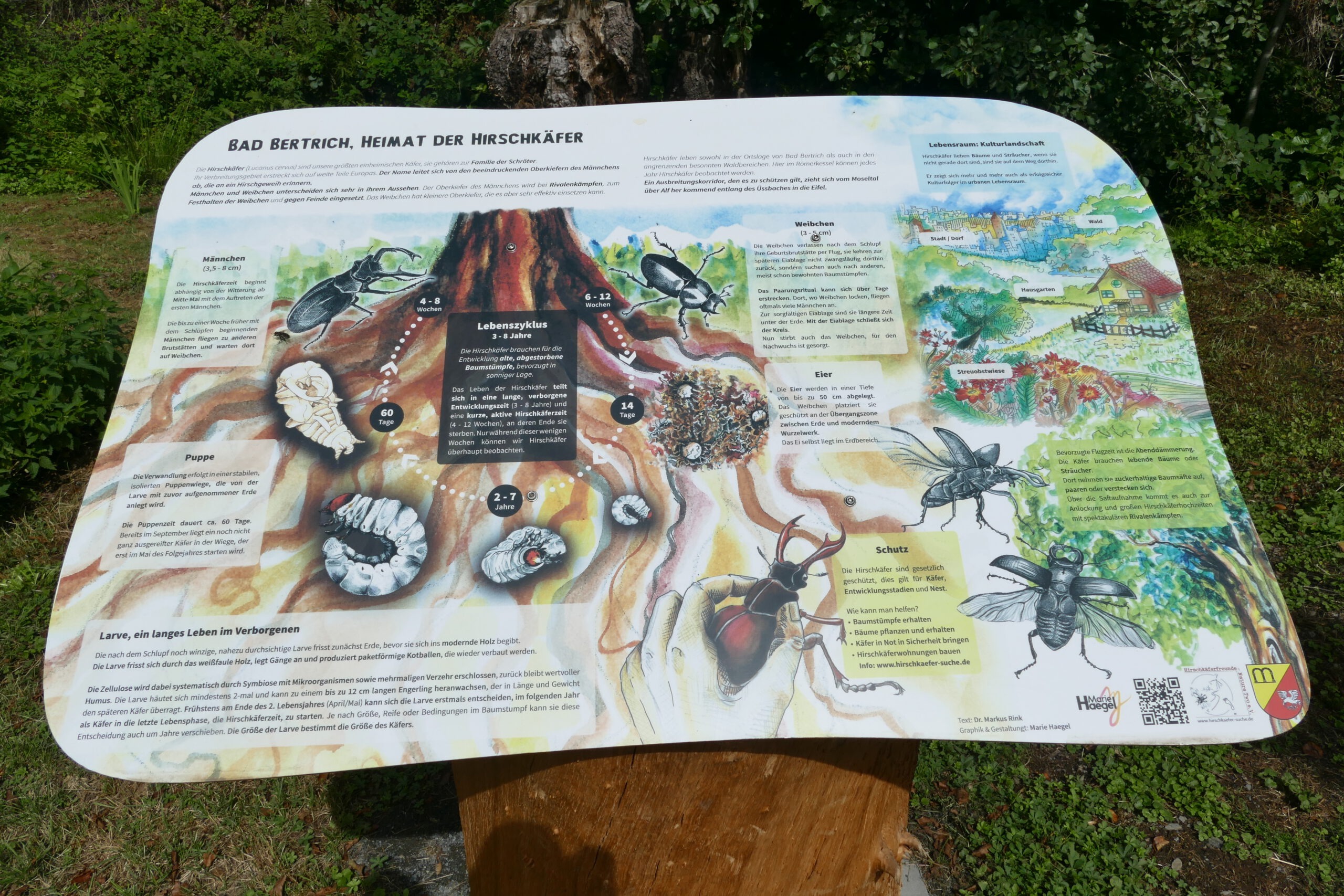 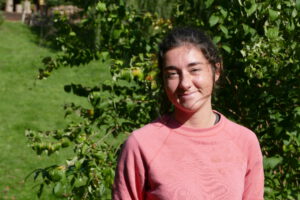 Marie Haegel is from France, Marseille and came to Alf in 2019 as part of a Voluntary Ecological Year. Marie Hegel studied art, history and journalism, she is currently working as a graphic designer in Germany.

During her year in Alf, Marie designed, drew and created many graphics, panels and pictures for the stag beetle hunt. We will draw from this “valuable treasure” for a long time. Maybe one day the graphics will be worth a lot, and a stag will find its way into art. Outstanding are her cartoons about the stag beetle as well as the design of the information board in the Roman Cauldron of Bad Bertrich. 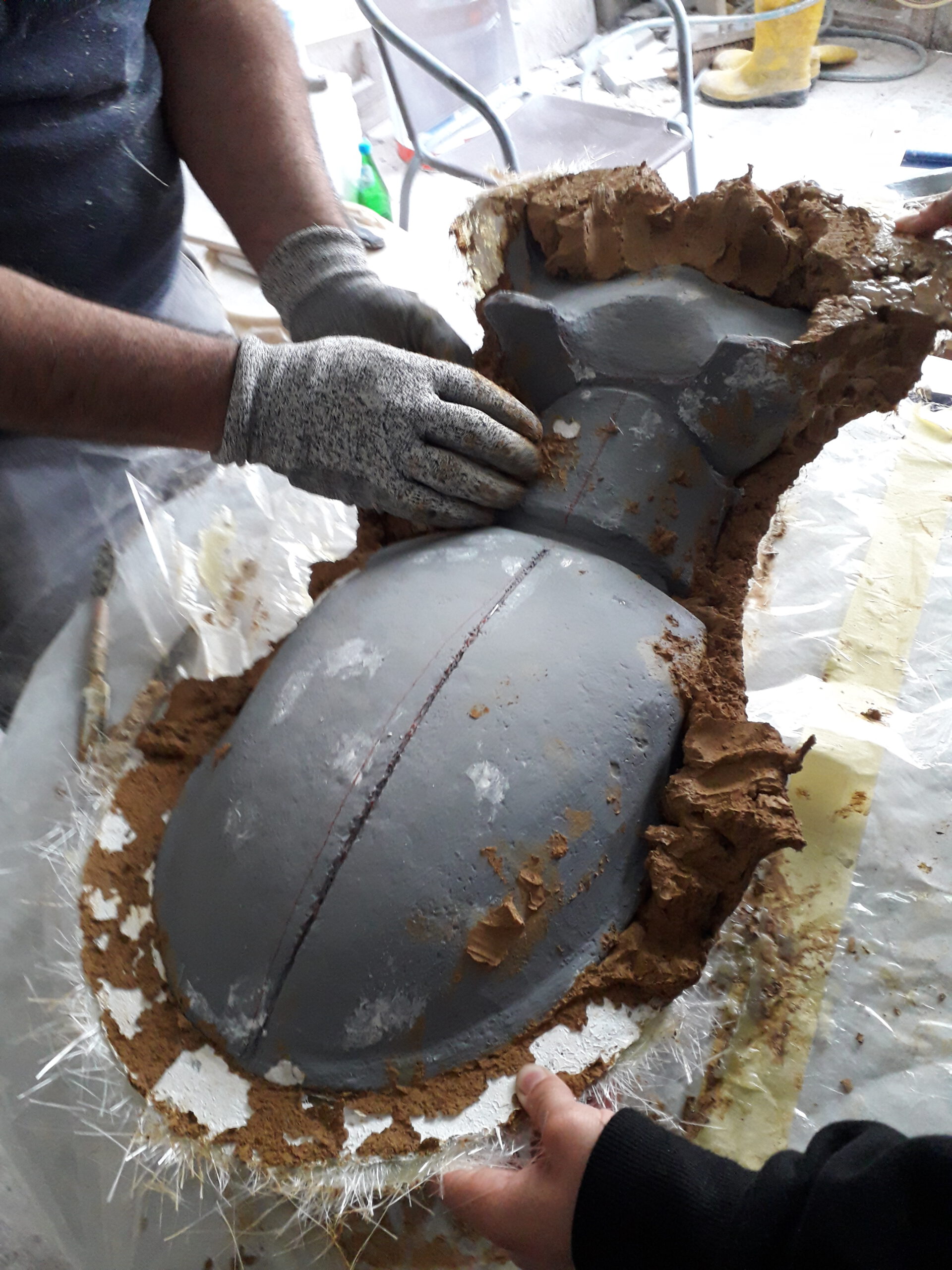 Artist from Alf at the Mosel.

This part is in progress. 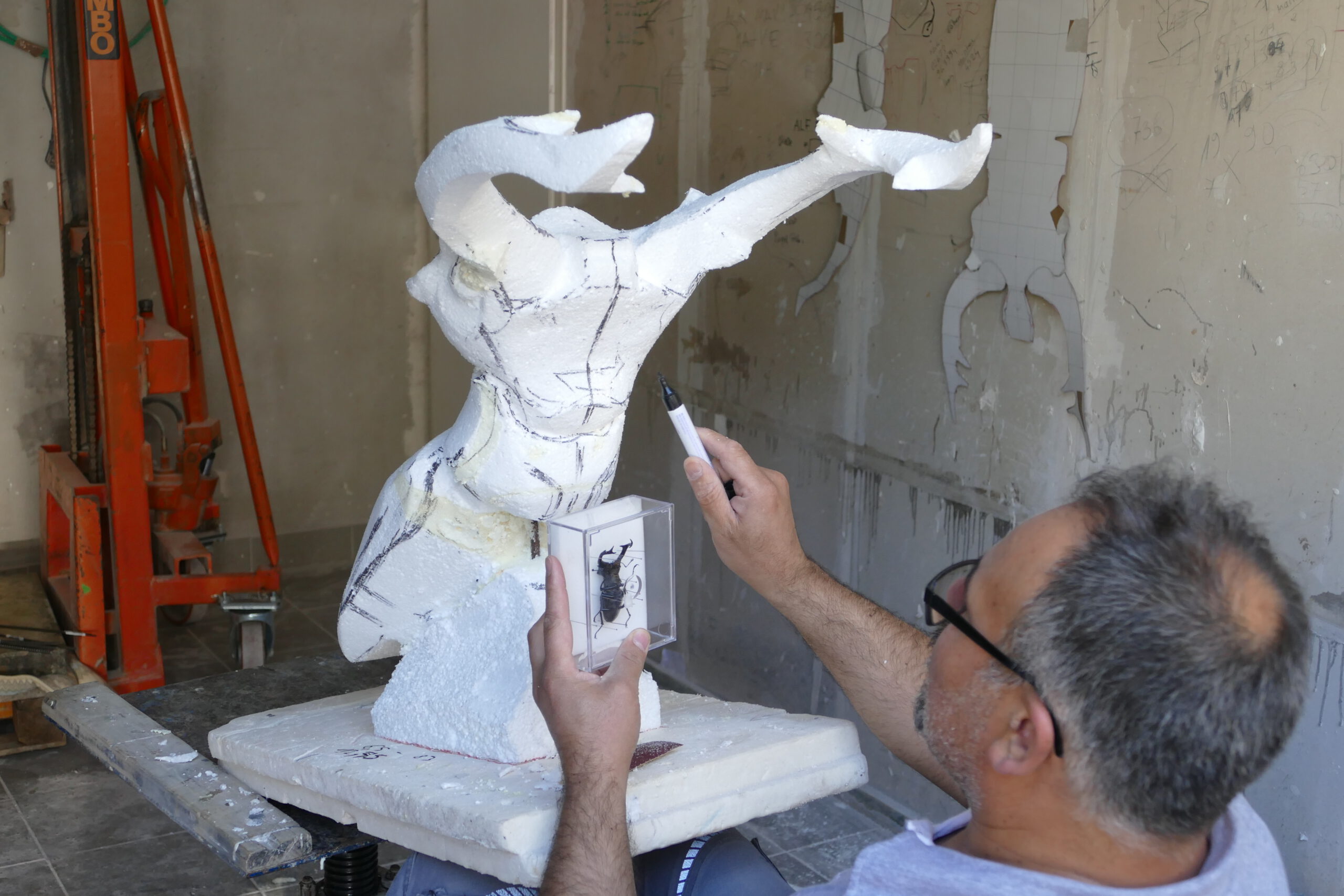 Thomas Pottier is from France, Brest and has studied biology. He has traveled a lot in the world in his young years. Cambodia, Bangkok, Sydney were his stops during school. In addition to biology, where he is passionately drawn to insects and spiders, he devotes himself with just as much passion to macro photography. Thomas Pottier is continuing his studies in this field as well as in wildlife filmmaking and we are sure to draw attention to himself. 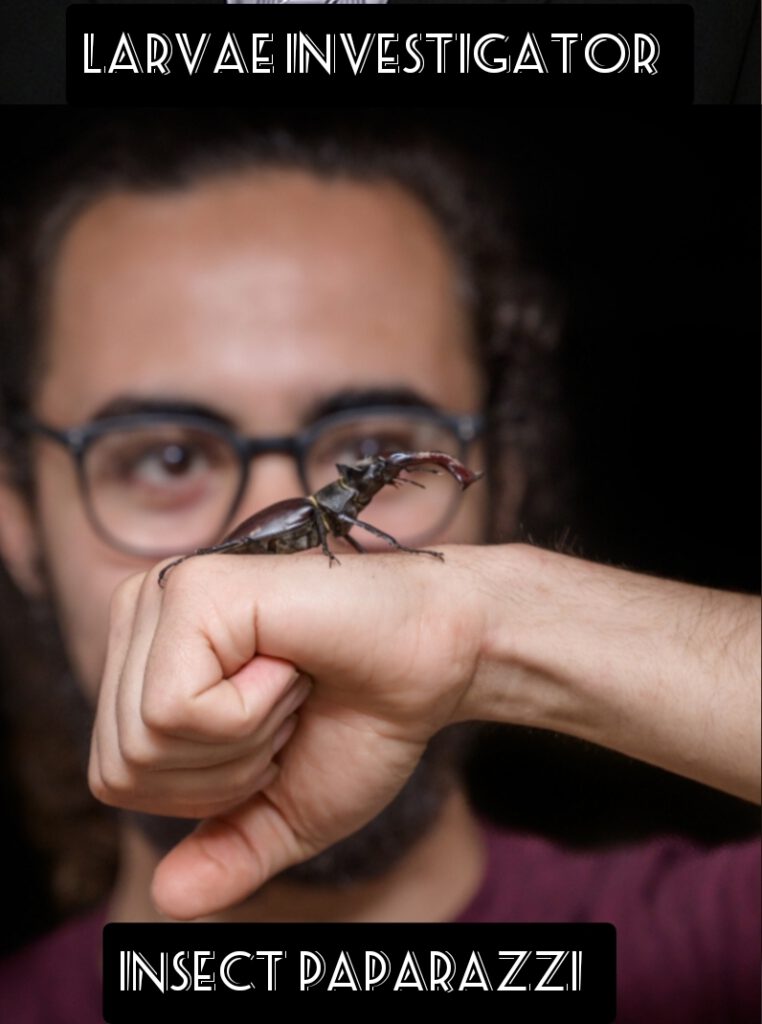 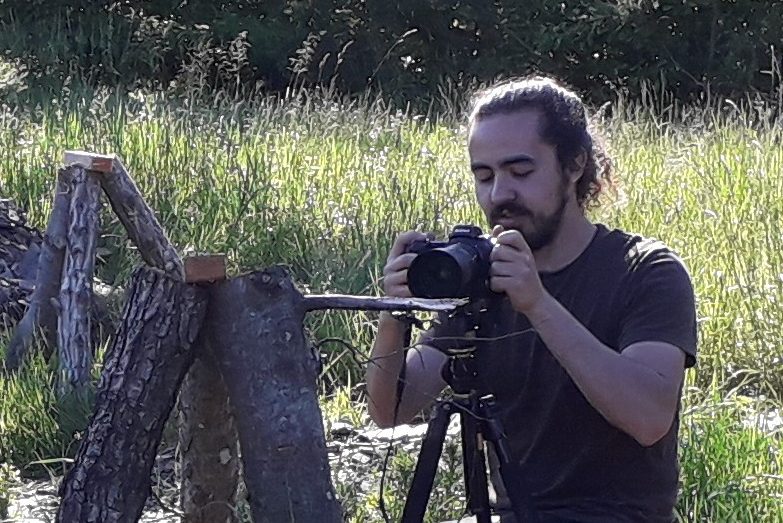 The world of insects

presented by Thomas Pottier, France
(Alf) 2021
Macro photography showing the beauty and diversity of our insects
A fascinating world that is unfortunately under severe threat. 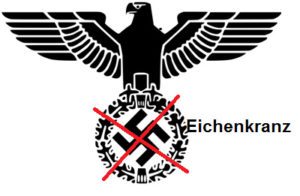 The fact is that the cultural films created in the 1920s achieved enormous media impact in theaters as opening credits and were later used specifically by the National Socialists for propaganda. “The Stag Beetle 1921” was the first film of its kind. The film shows sensational footage of Germany’s largest beetle by the standards of the time.

The former silent film was later accompanied by appropriate ideological commentary. The stag beetle was naturally a welcome guest in the ideology of the National Socialists, especially in that of Herman Göring, the Minister of Forestry and Nature Conservation, because of the attributes easily associated with it, such as fight, size, blood, oak, forest. Here I would like to emphasize once again that stag beetles were by no means always associated with these attributes in mythology, art and legend. I refer here to the stag beetle in Cologne Cathedral by Stefan Lochner from the 15th century, sitting on a plant of light.

The stag beetle film by Ulrich K.T. Schulz is considered the first German cultural film, a quasi-documentary genre intended to convey positive cultural values to the German people.This film is about the largest German beetle and its significance for the forest. The martial language of World War I, which has just ended, also influences the observation of nature: “They nibble from the blood of the swelling oaks.” “But even to this brief existence, the battle does not stay away.” “Victory and death.”
Source : Werkleitz 2015 https://werkleitz.de/der-hirschkafer

However, this should in no way diminish the achievement of Ulrich K.T. Schulz, who made a pioneering contribution to animal film technology for the time.

This film can be viewed via the Federal Archives if necessary, but this requires the consent of the rights holder Murnau-Stiftung, Wiesbaden. It is a 19-minute film, which certainly shows the development of the stag beetle very impressively for the time.

Commentary on the film:

Constructed associatively, the documentary describes the career of many German cultural filmmakers, epitomized by the development of cinematic perception of the imposing beetle. The culture film was originally a purely German invention, and in the 1920s and 1930s it usually ran in cinemas before the main program itself. Many German cultural filmmakers saw themselves as the avant-garde of film, not least because they tried to use their own ingenious apparatus to make visible what people had never seen before. The stag beetle was one of the very first subjects of a cultural film. Viewers were captivated by macro shots that were amazing for the time. Still in their 20s, German cultural filmmakers met in La Sarraz, Switzerland, with foreign directors like Sergei Eisenstein to advance the avant-garde against capital. A little more than a decade later, the same directors and cinematographers were mostly faithfully serving the National Socialists. And the stag beetle now also served to substantiate abstruse fascist and post-Darwinist theses. How could it come to this?

From the Stag Beetle to the Swastika is mounted in the original tradition of the German cultural film. Directors Lammert and Dewald try to use cinematic means to show the possibilities of manipulation and to create associative links. What one would have wished for the film is a bit more stringency. Excursions into the dark gothic scene or into the 3D modeling of bugs may also be of interest to some viewers, others will only be distracted from the actual and highly exciting story. – Source: Youtube

Conclusion: The stag beetle was unfortunately a welcome symbol for the ideology of the time and was instrumentalized.

Today’s myth about the stag beetle as an exclusively forest and oak loving beetle species must be seen under this historical influence, as it was deliberately clearly exaggerated, if not coined, by the ideology of the time. Incidentally, the National Socialists associated the imperial eagle with a swastika and a bordering oak wreath. The stag beetle was just another “victim”, what remained was a rigid doctrine on the way of life of this beetle, which was not exactly conducive to the protection of the species and unfortunately still is.